FrameShop is a script for Adobe Photoshop designed to give the photographer/artist a variety of mat and frame styles for displaying digital images on the Web. The previous version of the FrameShop script (v0.9.5) was described in detail in an earlier post on this blog. This new version (v0.9.7) runs on Photoshop CC 2015 and CS6, and has several new features and improvements (as well as bug fixes):

The FrameShop script dialog box is organized so that each option can be selected and customized independently, using a tabbed dialog: 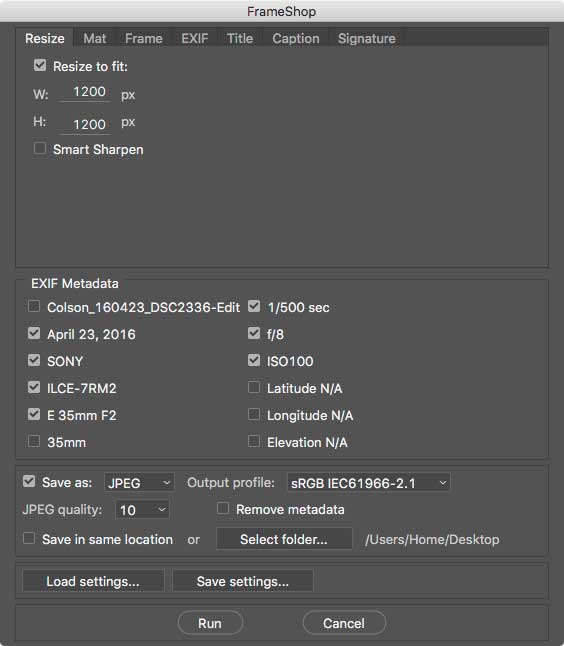 The dialog is displayed in the default Color Theme for Photoshop CC, chosen in the Preferences/Interface… menu.

Size and Sharpening
The script will size the final framed image to fit within the maximum width and height dimensions specified by the user, just as the Adobe Photoshop File/Automate/Fit Image… menu function does. The image will not be distorted to fit the dimensions, but will be proportionally sized, then matted and framed to fit the maximum dimensions specified. Checking the Smart Sharpen checkbox will apply sharpening, similar to the Adobe Photoshop Filter/Sharpen/Smart Sharpen… menu selection, to the image (before the mat and frame are added).

Here’s an example of what the script can do. Other examples of each mat style are in earlier posts. 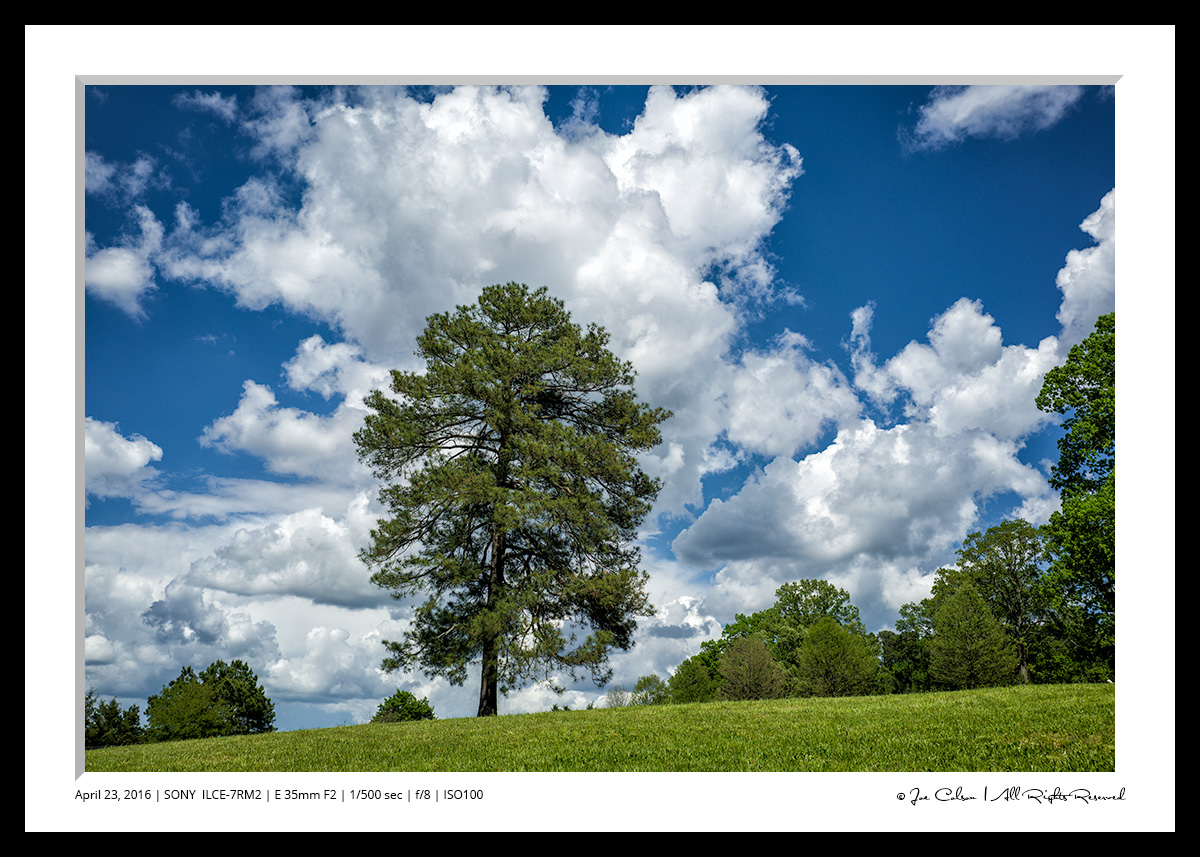 The various FrameShop elements that are referenced in this post are shown in this illustration: 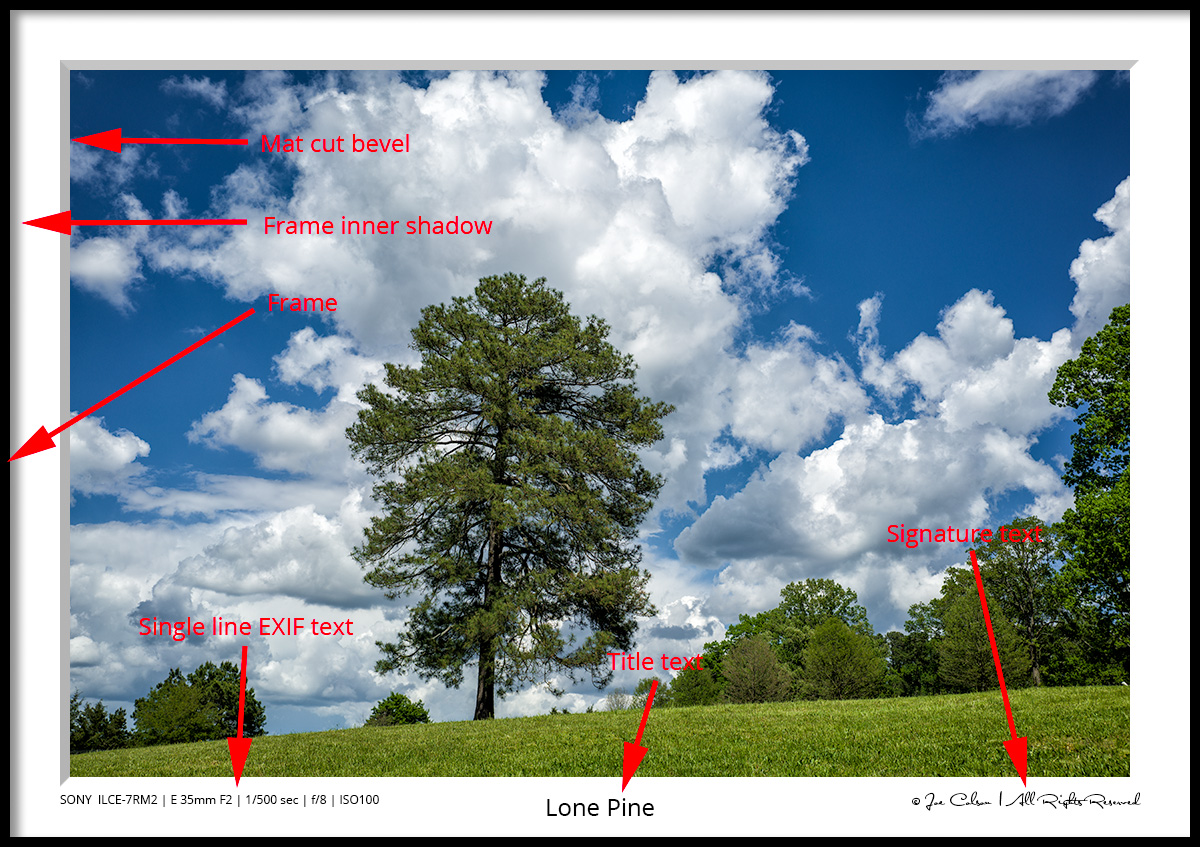 In this new version, beveling the frame edges is an option. It was the default and only choice in earlier versions. Here’s an example showing outer and inner frame edges beveled:

And without beveled edges, resulting in a matte look:

EXIF
FrameShop determines from the file’s EXIF metadata what information is available, and shows that metadata next to the individual EXIF checkboxes. If an EXIF element is not available, the script will show it as being not available (e.g., “Latitude N/A”). If you are uncertain about what information is available to Adobe Photoshop in the EXIF metadata, you can view the information from the Adobe Photoshop File/File Info… menu selection. The Font dropdown menu displays all of the fonts installed on the host system. FrameShop displays the following EXIF metadata (if available):

The EXIF text is by default positioned on the left in the bottom of the mat, but can be positioned either left, center or right. Its horizontal and vertical position can also be adjusted using the H offset and V offset boxes.

Up to 35 characters of additional “shooting information” can be added to the EXIF text. This optional text can be used to document gear used (“Gitzo tripod”), shooting conditions (“Raining cats and dogs”), or any other information pertinent to the image (“Hand-held”). 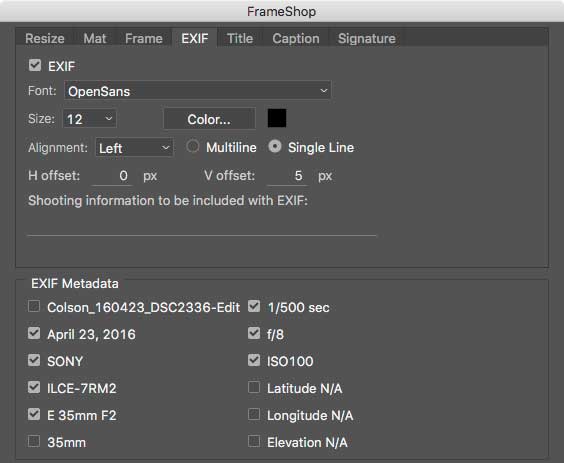 An option has been added to allow the EXIF to be formatted on a Single Line:

Or on multiple lines (Multiline), as had been the default (and only option) in prior versions:

Title
If title information has been saved in the source image’s IPTC Title metadata field, the script will show that text in the Title text box. The Title text is by default positioned in the center in the bottom of the mat, but can be positioned either left, center or right. Its horizontal and vertical position can also be adjusted using the H offset and V offset boxes. The Title text is limited to 35 characters.

Caption
If caption information has been saved in the source image’s IPTC Caption metadata field, the script will show that text in the Caption text box. The Caption text is by default positioned directly beneath the Title. Its horizontal and vertical position can however be adjusted using the H offset and V offset boxes. The Caption text is limited to 35 characters.

Load and Save Settings
By popular request, I’ve added the ability to save FrameShop settings, so that popular settings for different framing styles can be easily saved and retrieved. Clicking on the Save settings… button brings up a Save As dialog that lets you save the settings as an XML file in the desired location. Clicking on the Load settings… button brings up a file browser dialog that lets you load settings from a previously saved settings XML file. I’d suggest saving your settings in a folder (e.g. “FrameShop Settings”) somewhere easy to remember (e.g. Desktop). There is no limit to the number of settings files that can be saved.

Save
Once the other options are set, you can either run the script (by clicking Run), which saves the processed image as a JPEG, TIFF, PSD, PNG or GIF, or run the script and have the framed image remain open in Adobe Photoshop. The latter choice is useful when determining how to set the options, particularly the text offsets, or when you desire to manually adjust the layers in Photoshop. For example, with the Layers panel open in Photoshop, you can edit the text layers (EXIF, Title, Caption, Signature), set colors for the Mat and Frame layers, and/or adjust the layer effects. 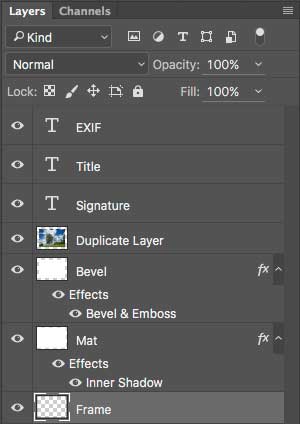 The image can be saved in the same location as the source file (Save in same location), or in a different folder, chosen by clicking the Select folder… button.

More information on the Save as options can be found in an earlier post.

Output Profile
The framed image can be saved with the same ICC profile as the original (Same as Source), or in one of several other ICC profiles:

The script requires Adobe Photoshop CC 2015 or CS6, and will run on a PC (Windows 7 or 10) or Mac (OS X). This version (v0.9.7) will not run on Photoshop CS5, earlier versions of Photoshop or on Photoshop Elements.

❝ Scripts can be accessed from the Adobe Photoshop Scripts menu (File/Scripts), which provides quick and easy access to your scripts. By putting a script file into the appropriate location on disk, it can be accessed directly from the Photoshop menu.

Scripts added to the Scripts folder while Photoshop is running do not appear in the Scripts menu until the next time you launch the application.

If you experience difficulty having the lens information (EXIF) appear in the script (“Lens N/A”), please ensure that you’re using the latest version of CC 2015. Adobe has fixed a bug in Photoshop and Lightroom (with Camera Raw 9.5.1) that caused the EXIF lens name to be hidden for some cameras.