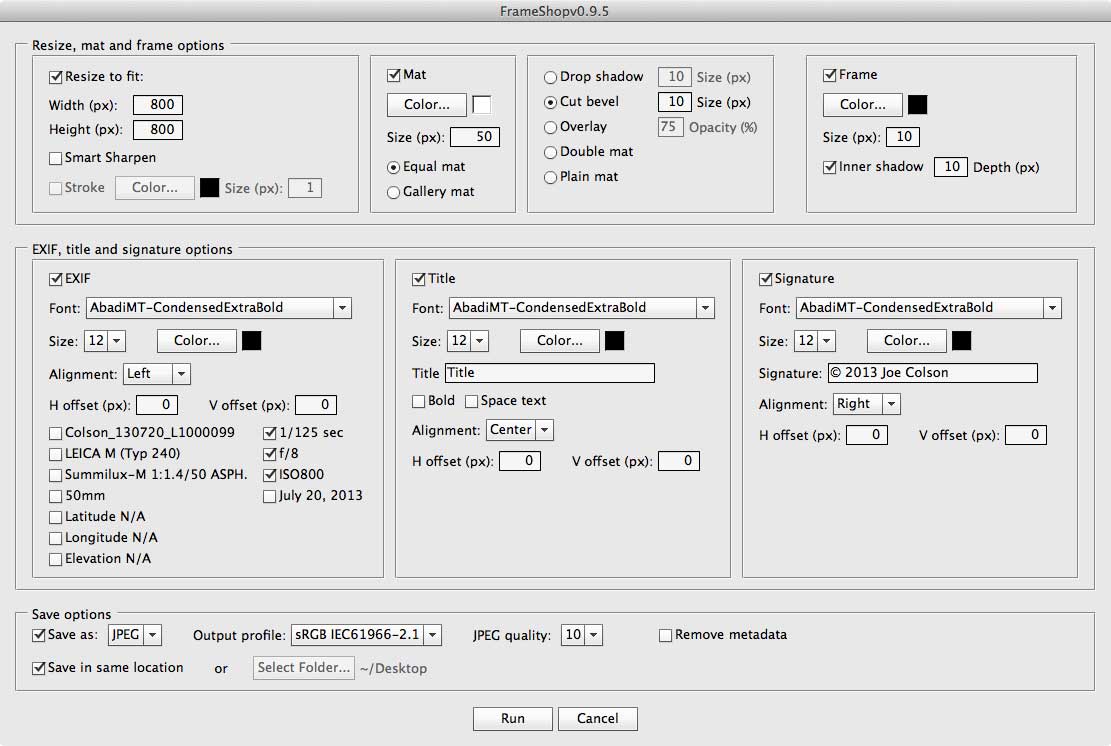 The Overlay style doesn’t add a mat. Instead, it converts the outer edge of the image (dimension set with the mat Size setting) to black and white. The opacity of the overlay is determined by the Opacity setting. A stroke can be added to the image for the Drop shadow and Plain mat selections. The mat can be set to have equal dimensions on all four sides (Equal mat), or set to have a bottom border that is twice the size of the other sides (Gallery mat).

Here are two examples of what the script can do. Other examples of each mat style are in an earlier post. 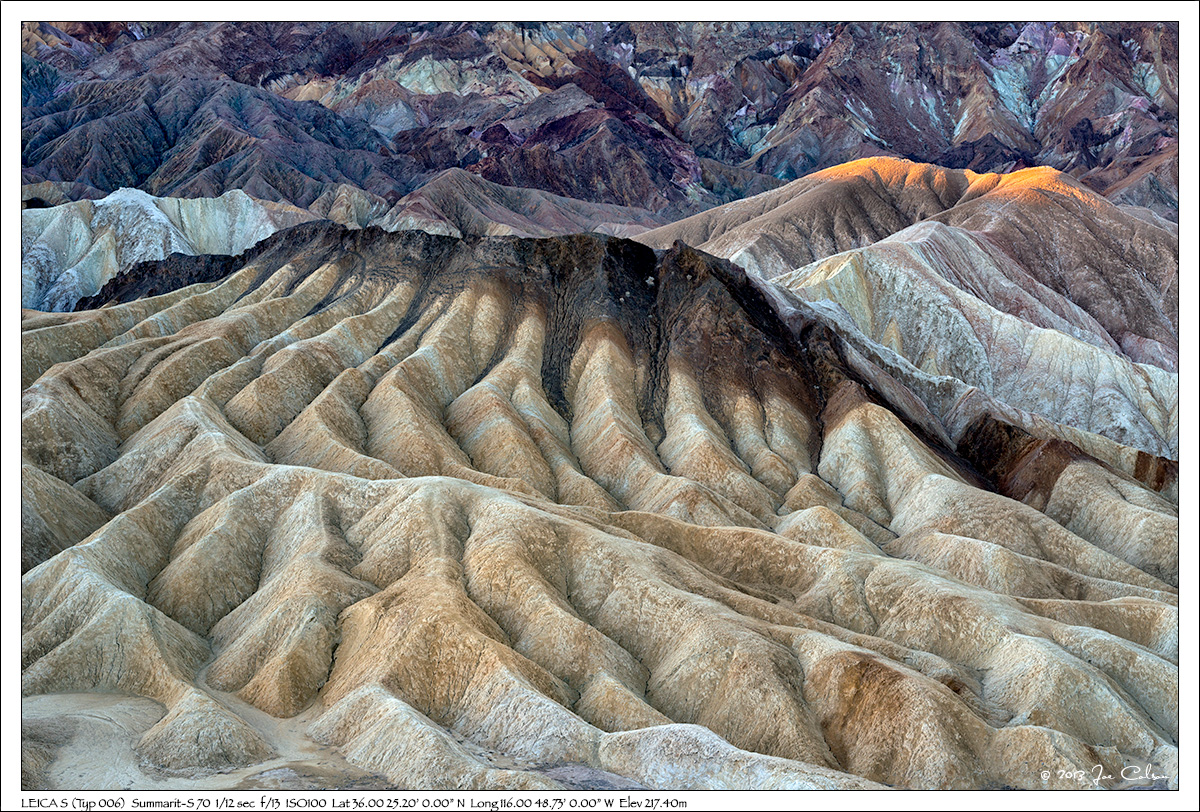 Frame
In addition to selecting the frame color using the Adobe Color Picker and setting the frame size (in pixels), you can add an inner shadow and set the size (Depth) of that shadow.

EXIF
FrameShop determines from the file’s EXIF metadata what information is available, and shows that metadata next to the individual EXIF checkboxes. If an EXIF element is not available, the script will show it as being not available (e.g., “ISO N/A”). If you are uncertain about what information is available to Adobe Photoshop in the EXIF metadata, you can view the information from the Adobe Photoshop File>File Info… menu selection. The Font dropdown menu displays all of the fonts installed on the host system. FrameShop displays the following EXIF metadata (if available):

The (optional) EXIF text is by default positioned on the left in the bottom of the mat, but can be positioned either left, center or right. Its horizontal and vertical position can also be adjusted using the H offset and V offset boxes. 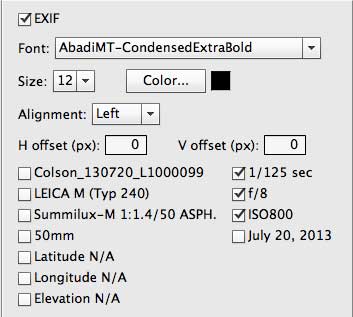 Title
If title information has been saved in the source image’s IPTC Title metadata field, the script will show that text in the Title text box. The (optional) Title text is by default positioned in the center in the bottom of the mat, but can be positioned either left, center or right. Its horizontal and vertical position can also be adjusted using the H offset and V offset boxes. 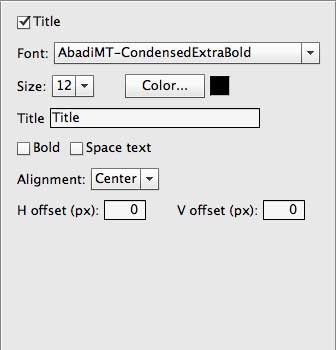 Signature
If copyright information has been saved in the source image’s IPTC Copyright metadata field, the script will show that text in the Signature text box. The (optional) signature text is by default positioned on the right in the bottom of the mat, but can be positioned either left, center or right. Its horizontal and vertical positions can also be adjusted using the H offset and V offset boxes. 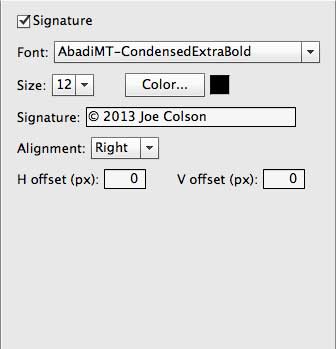 Save
Once the other options are set, you can either run the script and save the result as a JPEG, TIFF, PSD, PNG or GIF, or run the script and have the framed image remain open in Adobe Photoshop. The latter choice is useful when determining how to set the options, particularly the text offsets, or when the user desires to manually adjust the layers in Photoshop. The image can be saved in the same location as the source file (Save in same location), or in a different folder, chosen by clicking the Select Folder… button.

The framed image can be saved with the same ICC profile as the original (Same as Source), or in one of several other ICC profiles:

Clicking Cancel dismisses the dialog box and returns you to the open source file.

Installation
The script requires Adobe Photoshop CS5 or CS6, and will run on a PC (Windows 32-bit and 64-bit) or Mac (OS X). This version (v0.9.5) will not run on Photoshop CS4 or earlier versions of Photoshop. Install the script in the Scripts folder so that it will show up in the Files/Scripts menu of Photoshop:

Be sure to restart the Photoshop application after script installation.
Or you can put the script anywhere (on your desktop for example) and browse to the script using the Photoshop File/Scripts/Browse… menu.

Download the .zip file and, after unzipping, install as detailed above.

If you experience difficulty with a localized version of Photoshop (versions of Photoshop other than North American English language), I have disabled the version check logic just for you:

For those who became hooked on the color presets of the initial version of FrameShop, you can find popular hexadecimal Web-friendly colors on a number of websites. Just do a Google search for “hexadecimal color codes”. Here’s an example.